Out of all the historic sites in Istanbul, the most captivating has to undoubtedly be the Dolmabahce Palace in Istanbul. This grand and impressive palace was originally a bay and then a mansion, occasionally used by the Turkish sultans for relaxing and feasting.

Over time, this lavish structure took shape of a palace somewhere in between 1842 to 1856. Abdulmejid I – the 31st Sultan of the Ottoman Empire used this mesmerizing palace for both living and for hosting various royal occasions.  After the death of Abdulmejid, his successor Abdulaziz made this palace his ultimate winter residence while Beylerbeyi Palace became summer residence.

In the early 20th century, Dolmabahce Palace turned from a mere luxurious residence into the presidential house in 1924. The first president of Turkey – Mustafa Kemal Ataturk stayed in a small room at the palace and invited foreign guests during his eventful stay. Ironically, the bedroom owned by Ataturk also happens to be his deathbed as he died in there in 1938.

The splendor of the palace lies in the fact that it boasts a total of 285 rooms, 44 halls, 68 toilets, and 6 Turkish baths. But that’s not it. Research shows that 14 tons of gold was employed to embellish the ceilings in gold leaf and pure crystals for the main staircase.  The palace also features the largest chandelier in the world which was gifted by Queen Victoria of England.

For Dolmabahce Palace Tour during your layover, note that the opening hours of the Dolmabahce Palace in Istanbul for visitors are on Tuesday to Wednesday and Friday to Sunday between 9 am – 4 pm. So make sure that you make the most of your memorable trip by visiting this palace on one of these days!

Where is Dolmabahce Palace located ?

Dolmabahce Palace is located on shore of Bopshorus in Besiktas neigborhood next to famous high-end hotels  such as Shangri-La,Four Seasons and Cıragan Kempinski. Dolmabahce Palace’s address is Visnezade, Dolmabahce Cd., 34357 Besiktas/Istanbul. 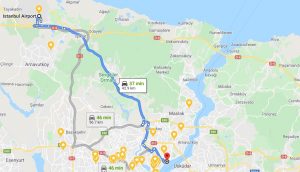